My first project as the “apprentice” under Pip Cheshire was to help document and design a refurbishment of a 1960s Builders Special in ‘Beverly Hills Glendowie’, home of many Consulates and Kiwi success stories of the day. 21 years later... Read more

My first project as the “apprentice” under Pip Cheshire was to help document and design a refurbishment of a 1960s Builders Special in ‘Beverly Hills Glendowie’, home of many Consulates and Kiwi success stories of the day. 21 years later, I was invited back to refurbish an aging kitchen, laundry and bathrooms, but also to leave in tact what was a period of bold New Zealand Architecture.

The land of Post Modern Architecture has had its fair share of sniggers and cheap shots, and some refer to the style as brash and opulent. I believe in optimism and an embrace of bold colour, Kiwi-ana and to bathe in the glory of fun, sun and paua shells.
I recall an interview, and Pip Cheshires’ take on this exploration, which was to describe the style as “poly-modern”. A Kiwi interpretation of the work of Architects such as American Architects such as; Michael Grave’s, Charles Moore, and specifically Stanley Tigerman and the Post Modernist Memphis style.

This interpretation was also embraced by New Zealand Architects of the time as a response “from the edge” and celebrated as such.
We have left the bold and beautiful distressed walls, aluminium “bridge to nowhere” in places, and upgraded the tired linoleum floor tiles, replacing them with a pre-finished engineered oak overlay.

A further introduction of clear finished Keruing 19mm plywood, has softened the palate, although the use of four strong mosaic, swan lake and floral patterned wallpapers have been used to communicate at the “right volume and hue”. The use of cabinet hardware with a nautical them also reflects the sub themes to the original interior.

Orange glass blocks (in true 80s parlance) replace original white glass blocks in the ensuite, (to add noise to the space), and blue backlit glass adds funk to the kitchen. The fireplace in the lower media room is finished with a black polished Ambitec plaster and with a stunning fuchsia Sallee carpet, sets off the mandarin alcantarine Togo Ligne Roset couch designed by Michel Ducaroy in 1973.

This house is a collection of interesting objects and artworks, that are moderate in cost, but high on life and memory . The spaces and original “ aluminium bridge to nowhere” reflects that clients sense of fun, passion and energy. Every room in this house is another story.

I look forward to revisiting this project in another 21 years. 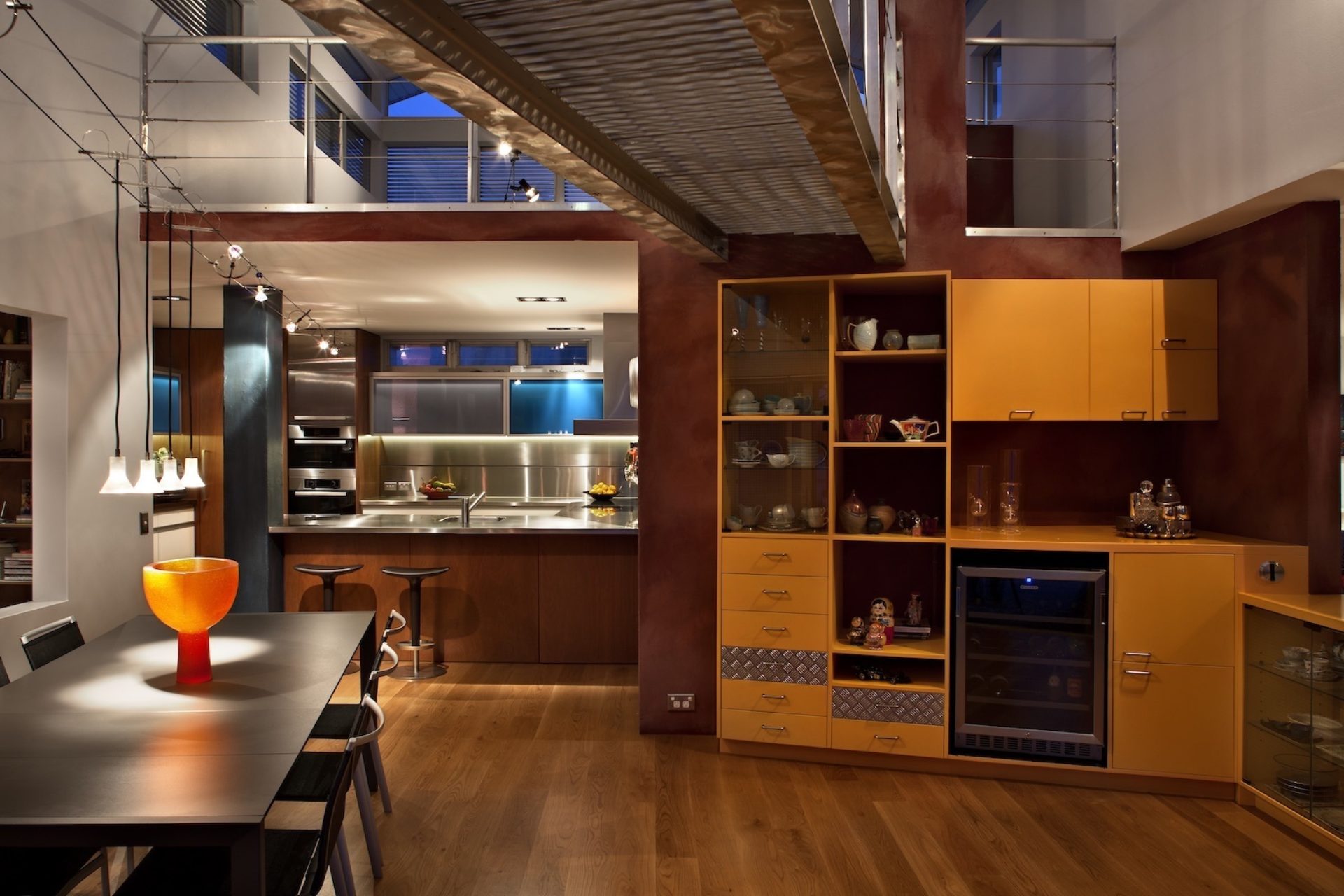 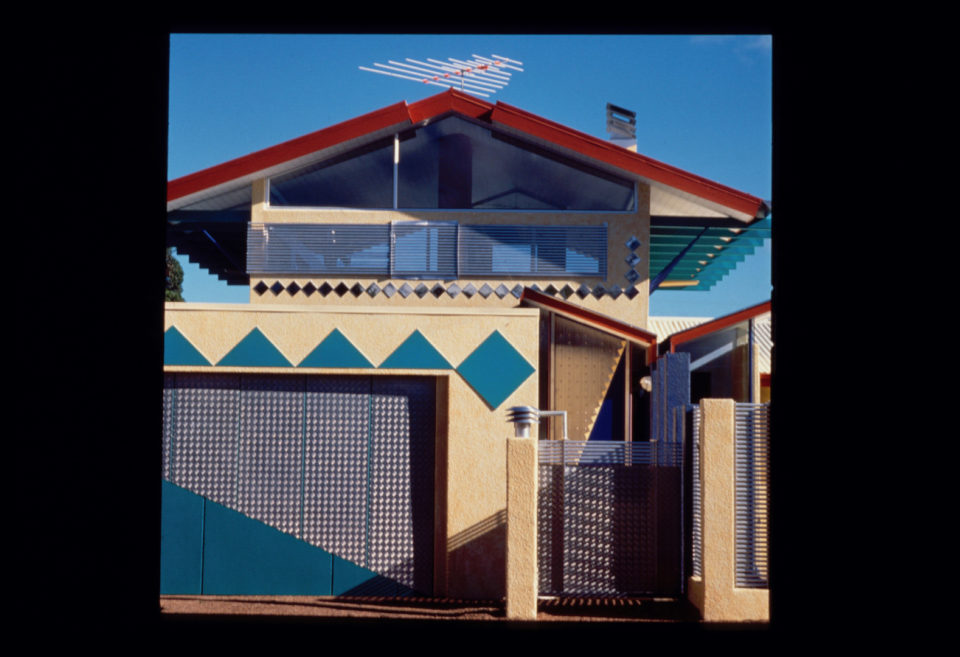 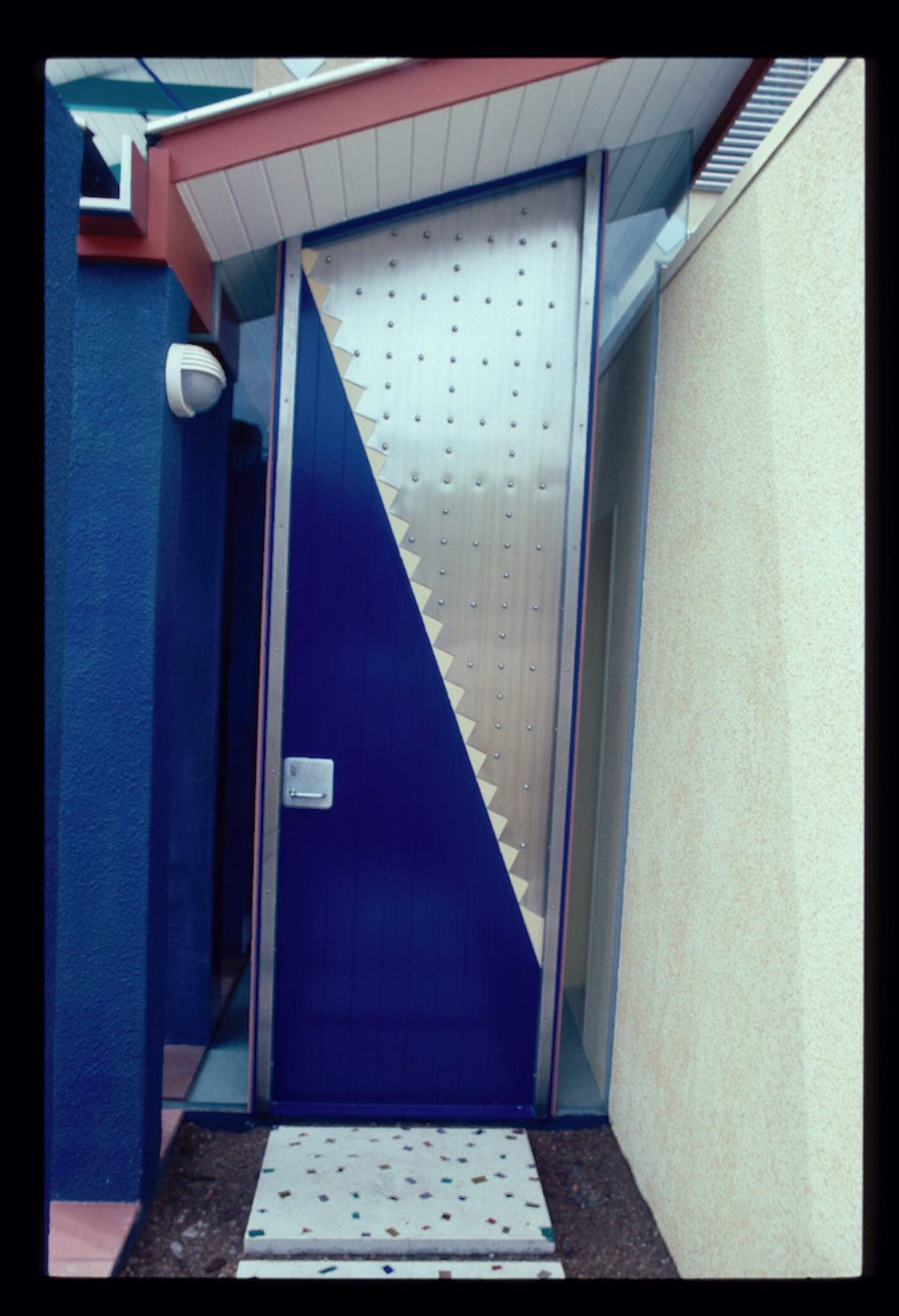 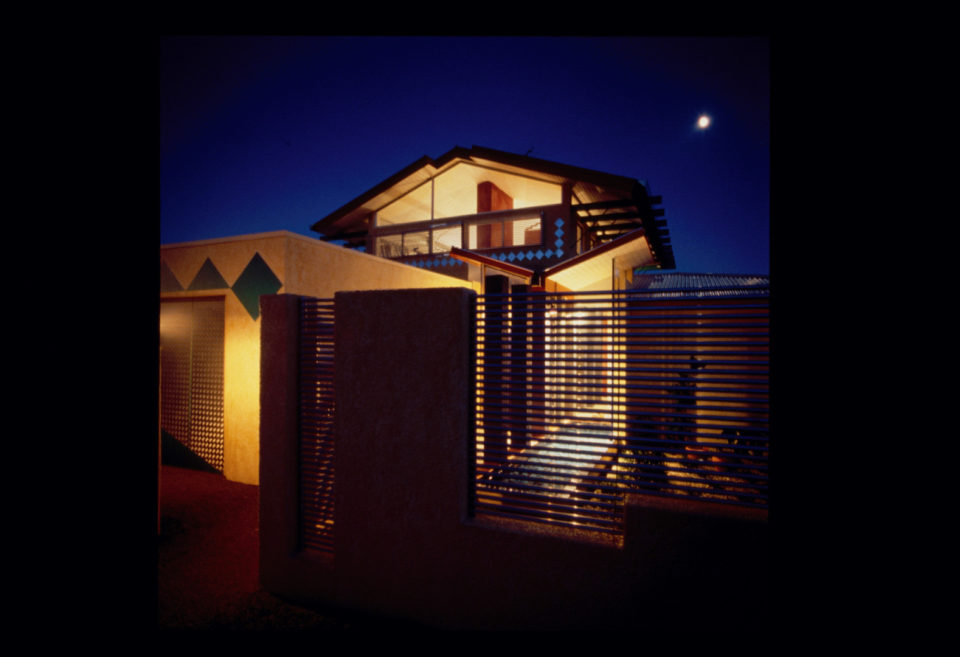 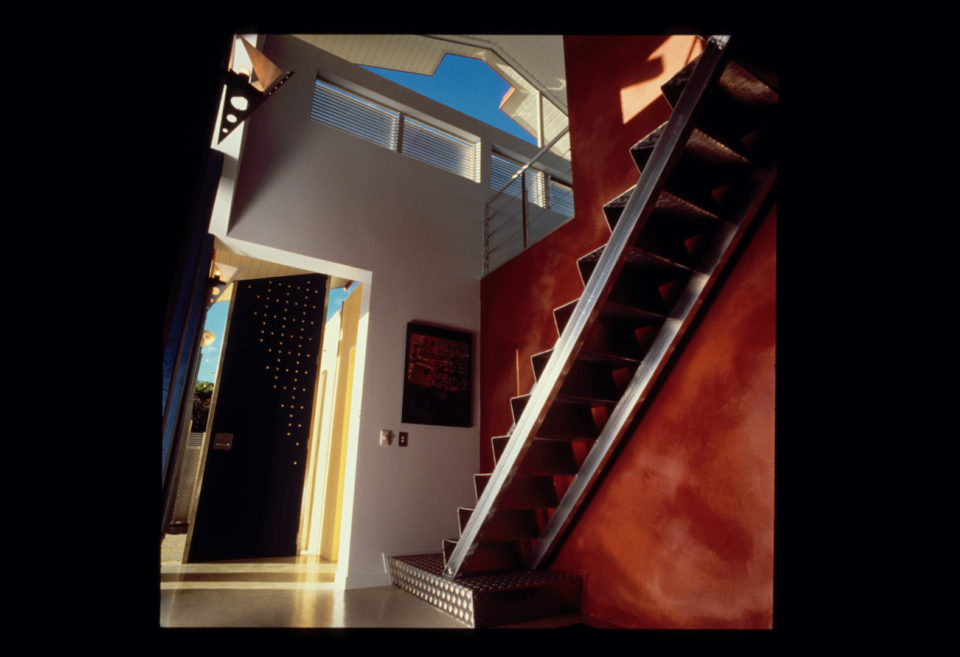 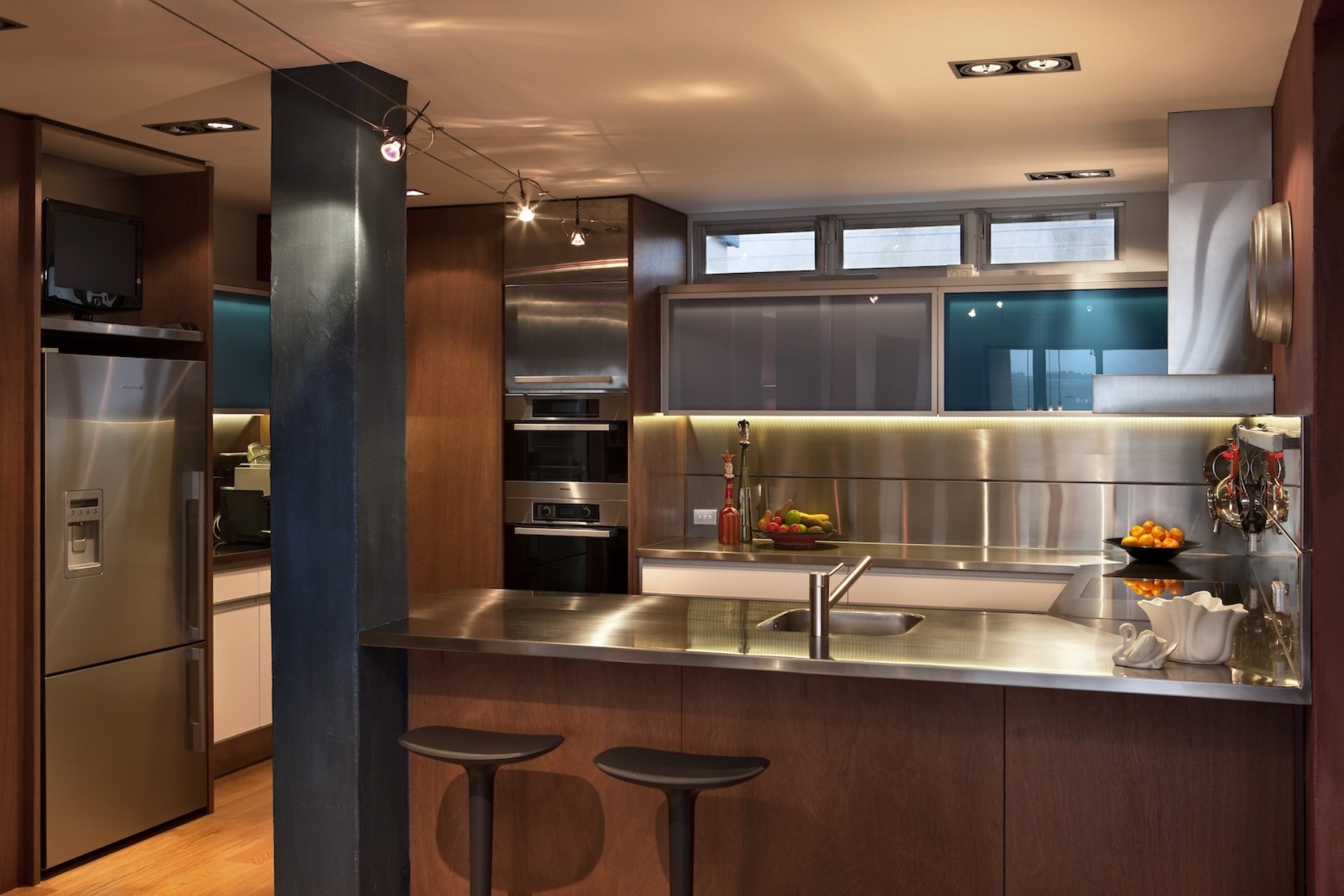 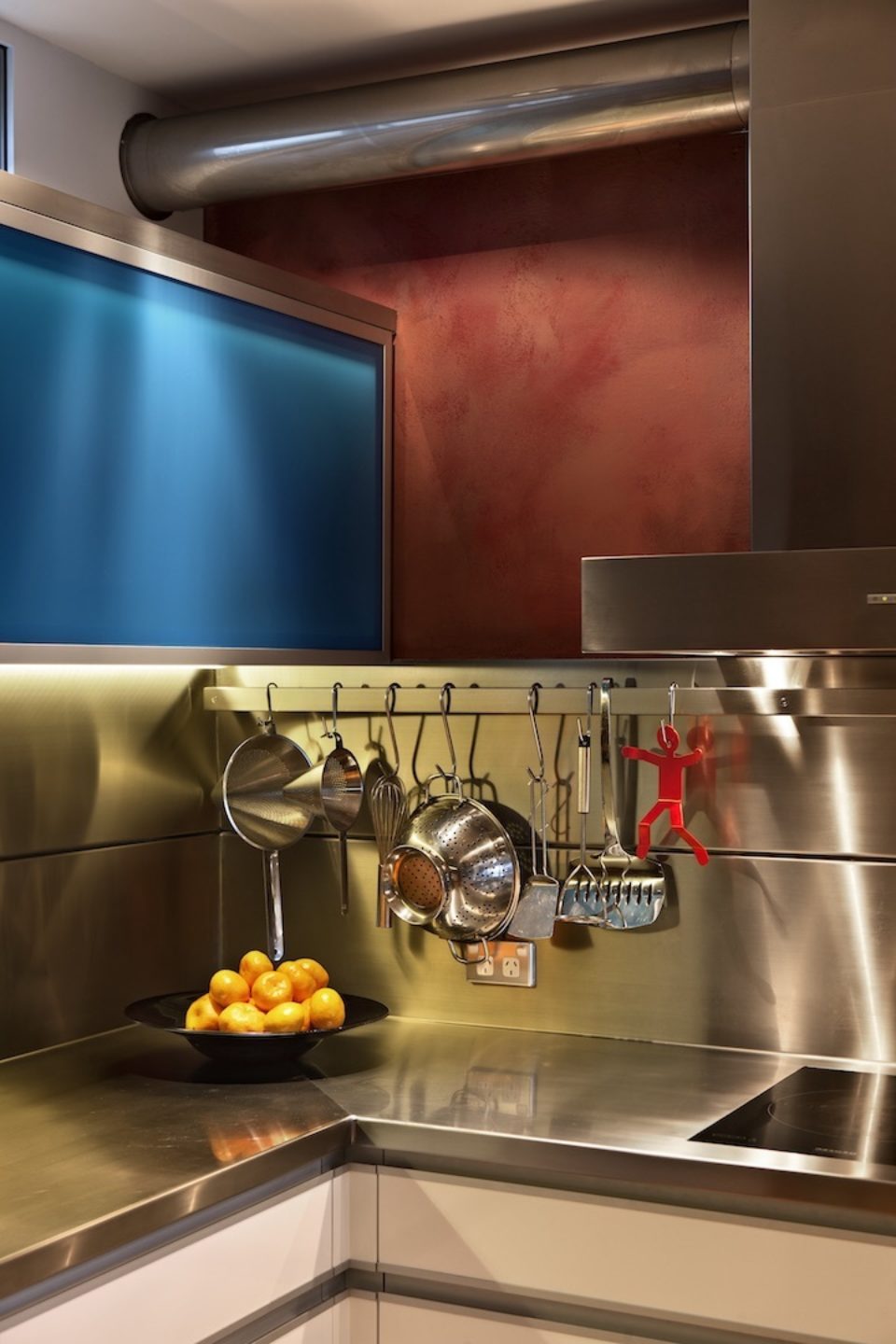 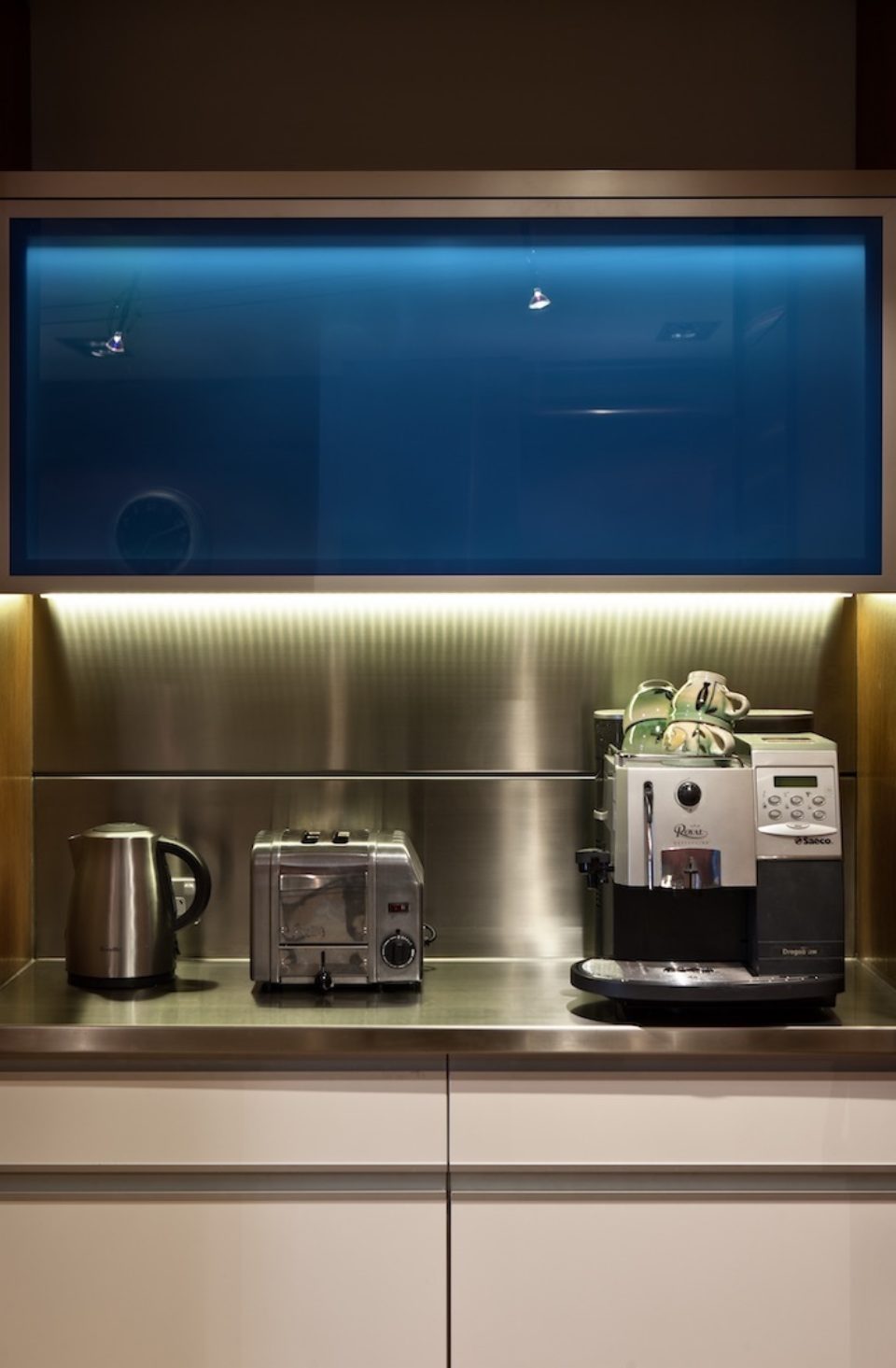 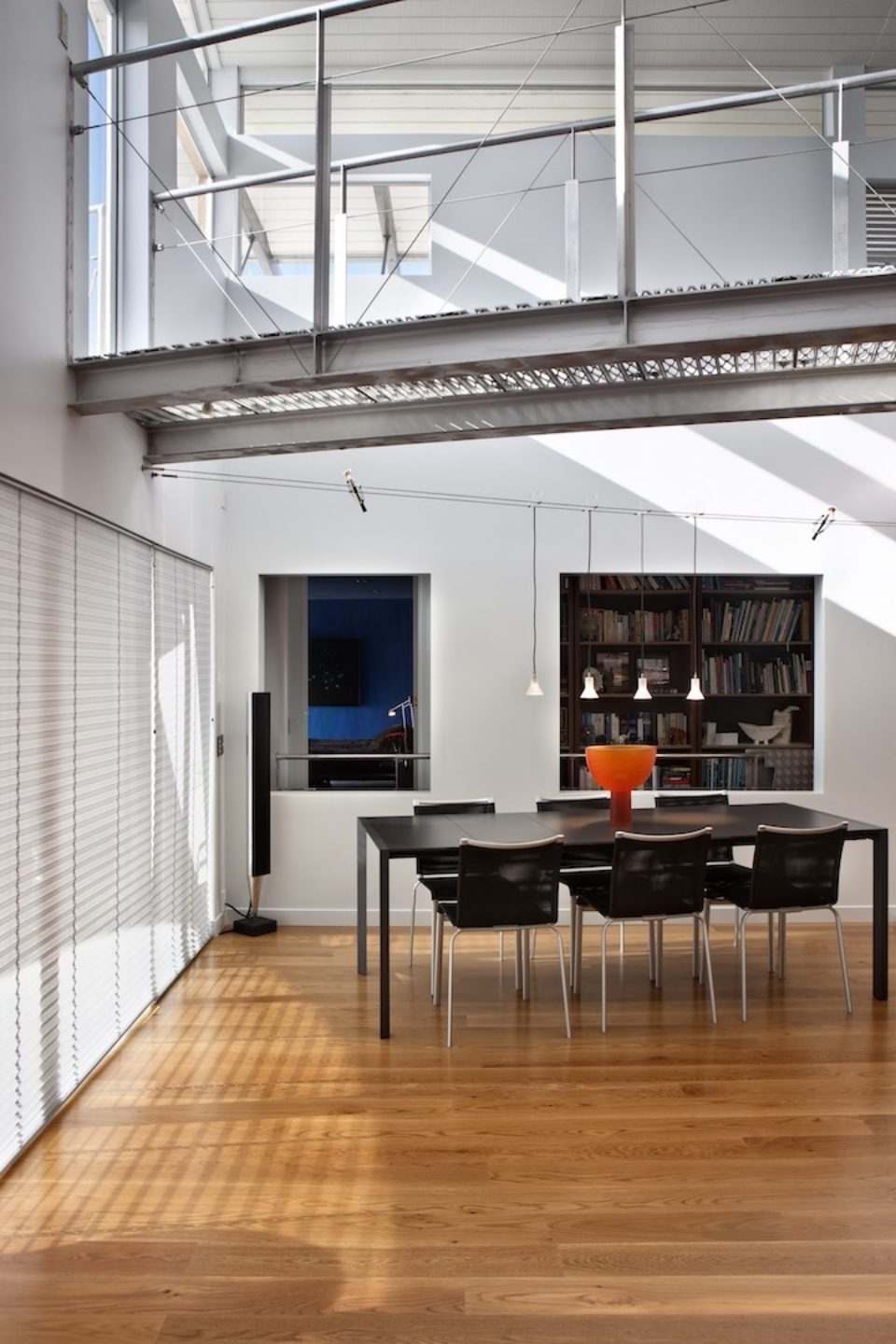 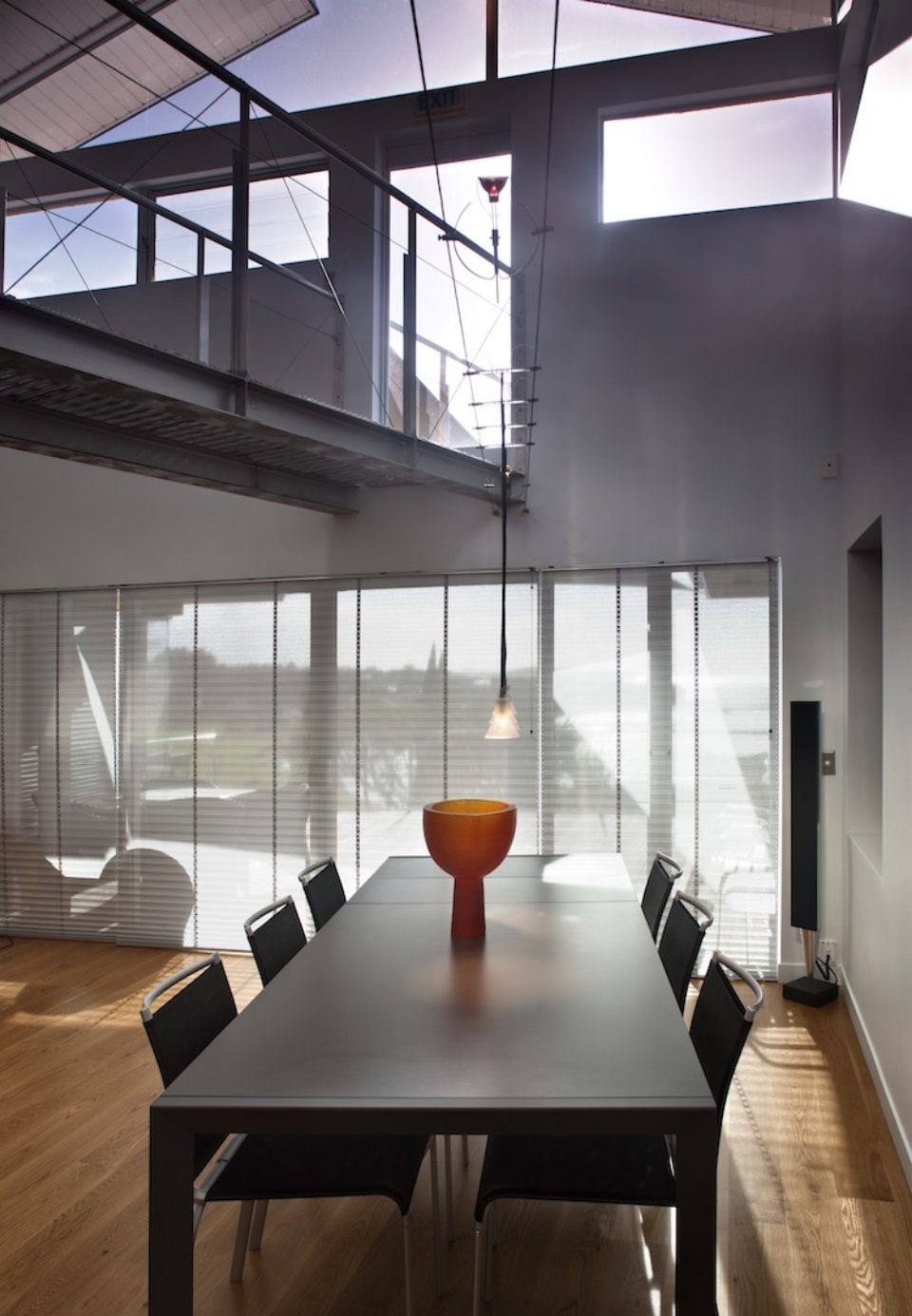 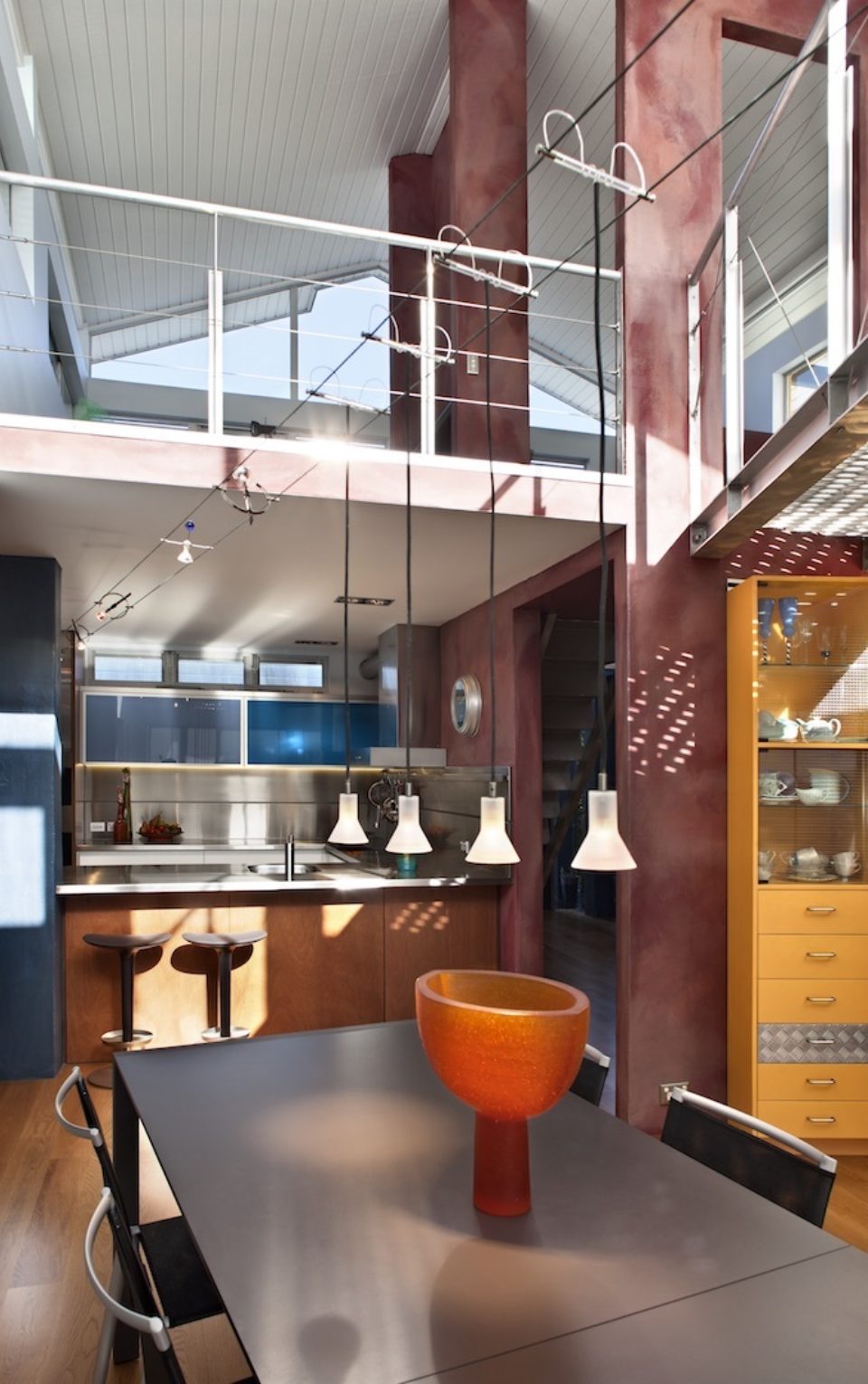 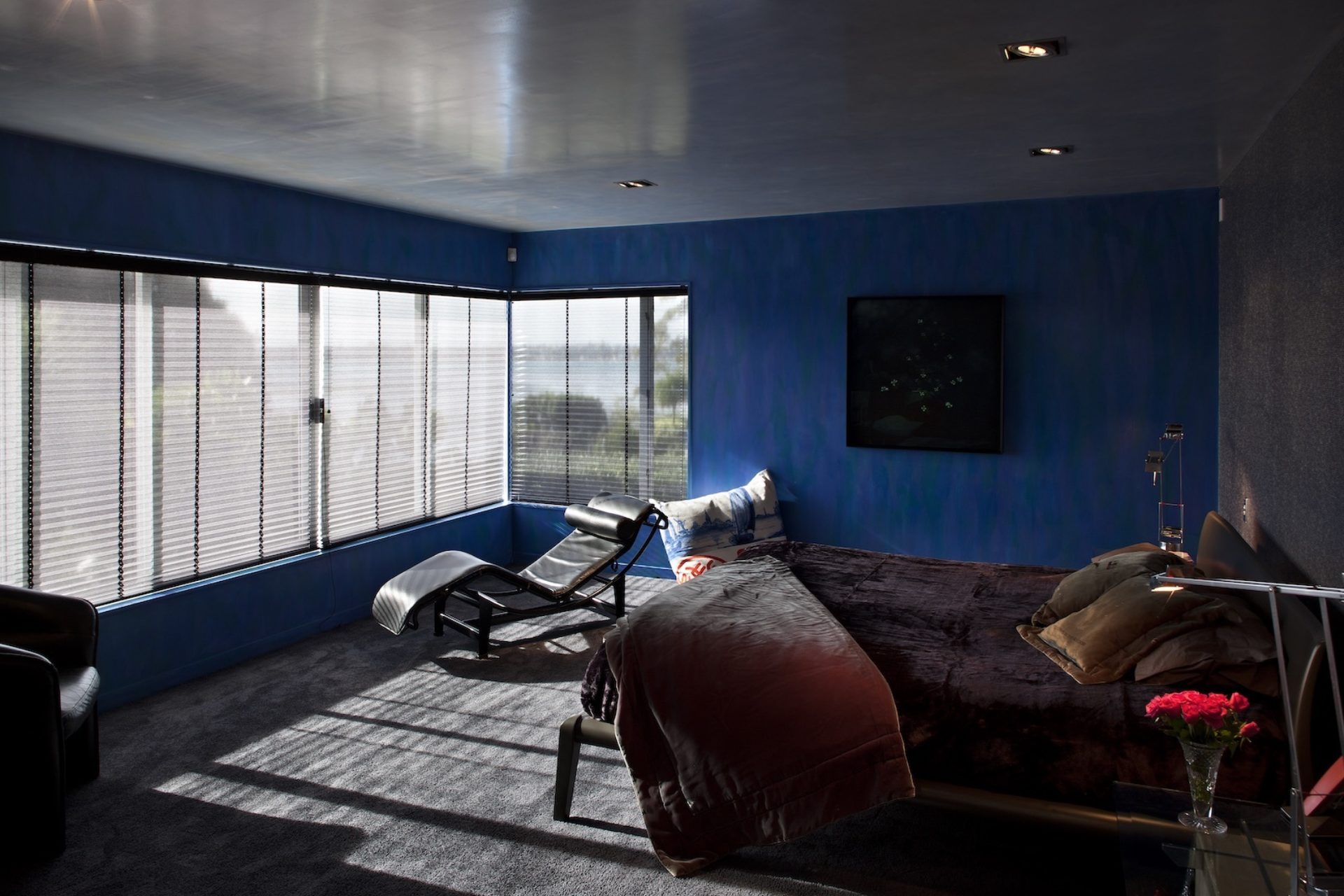 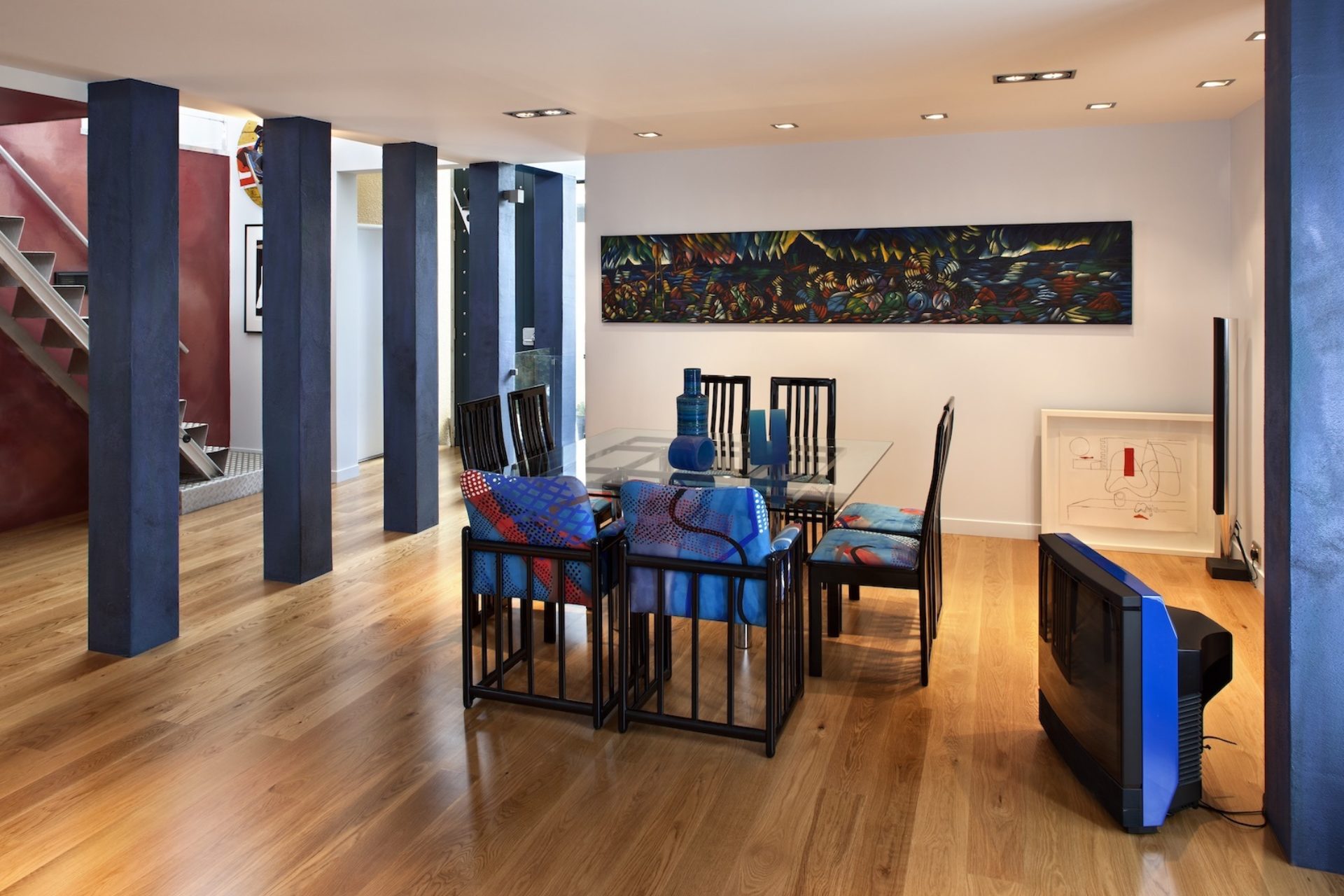 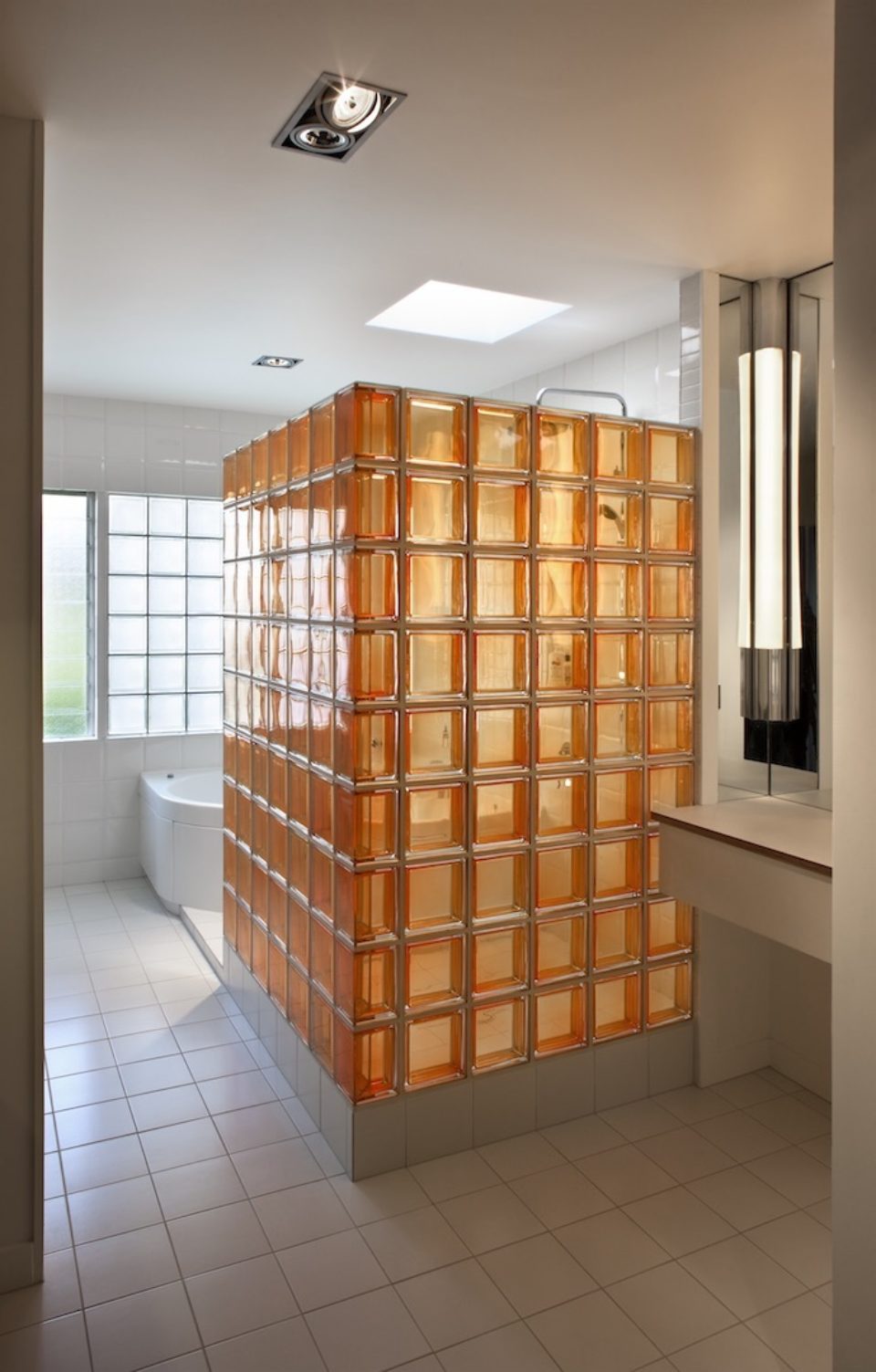 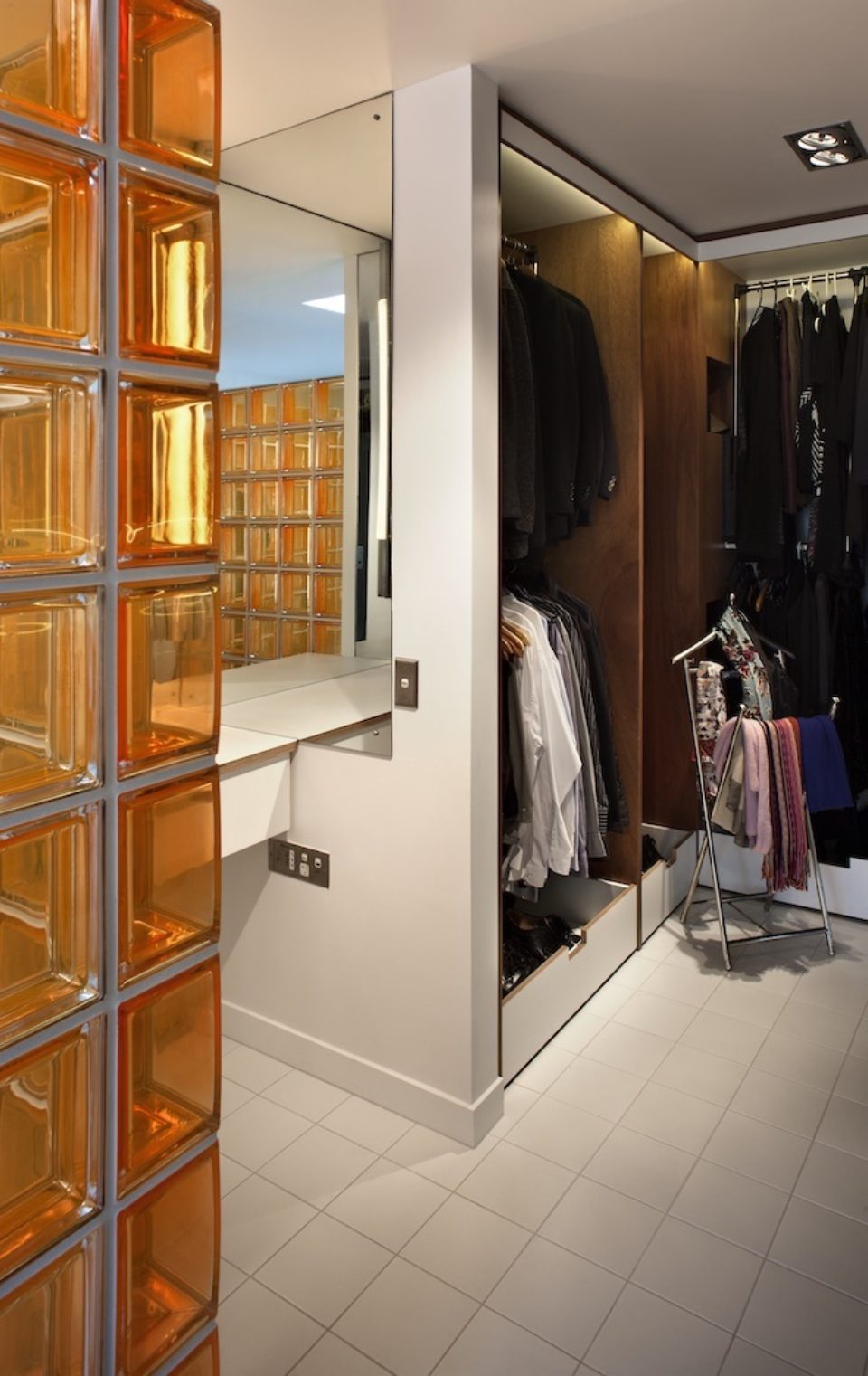 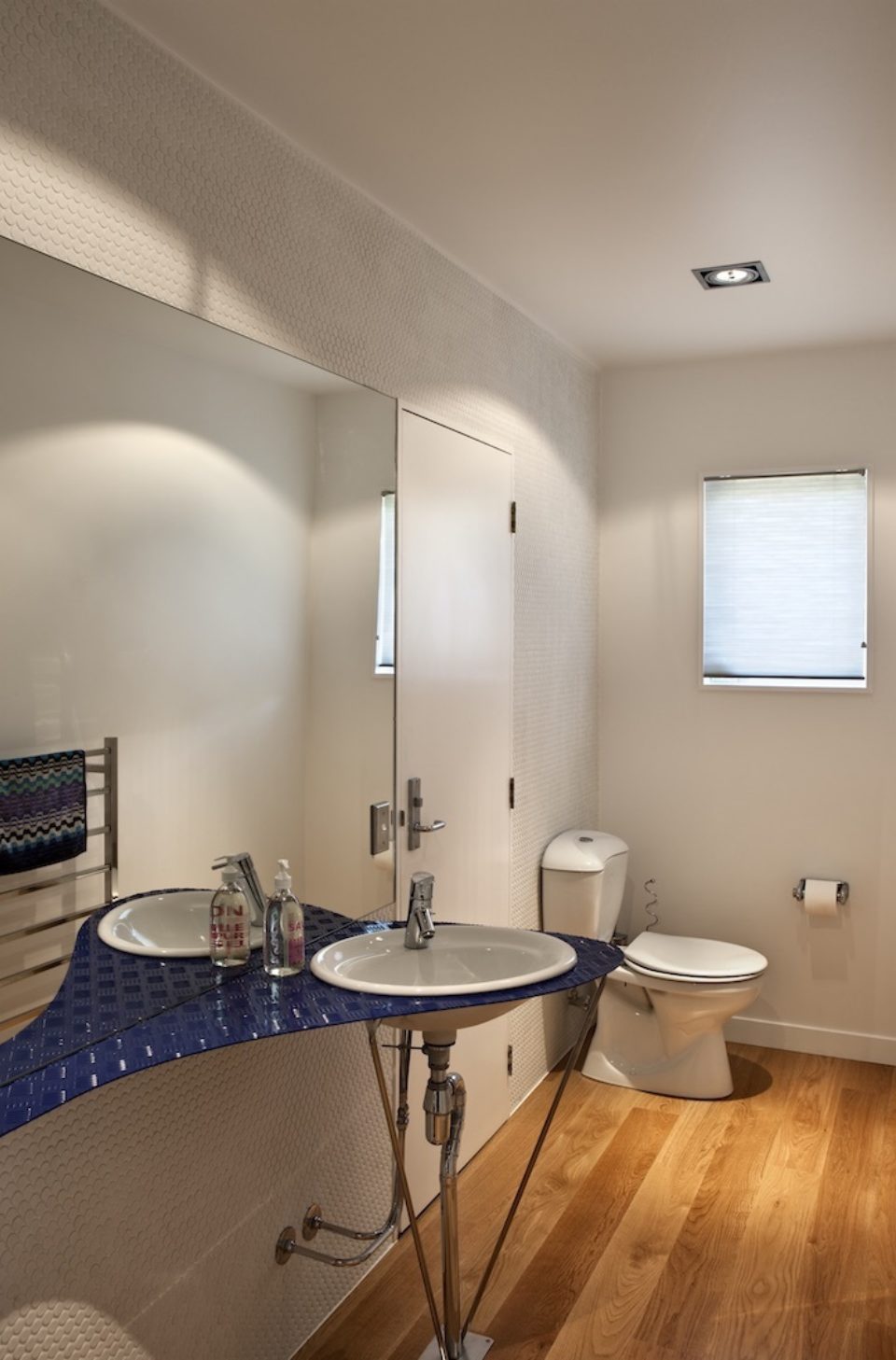 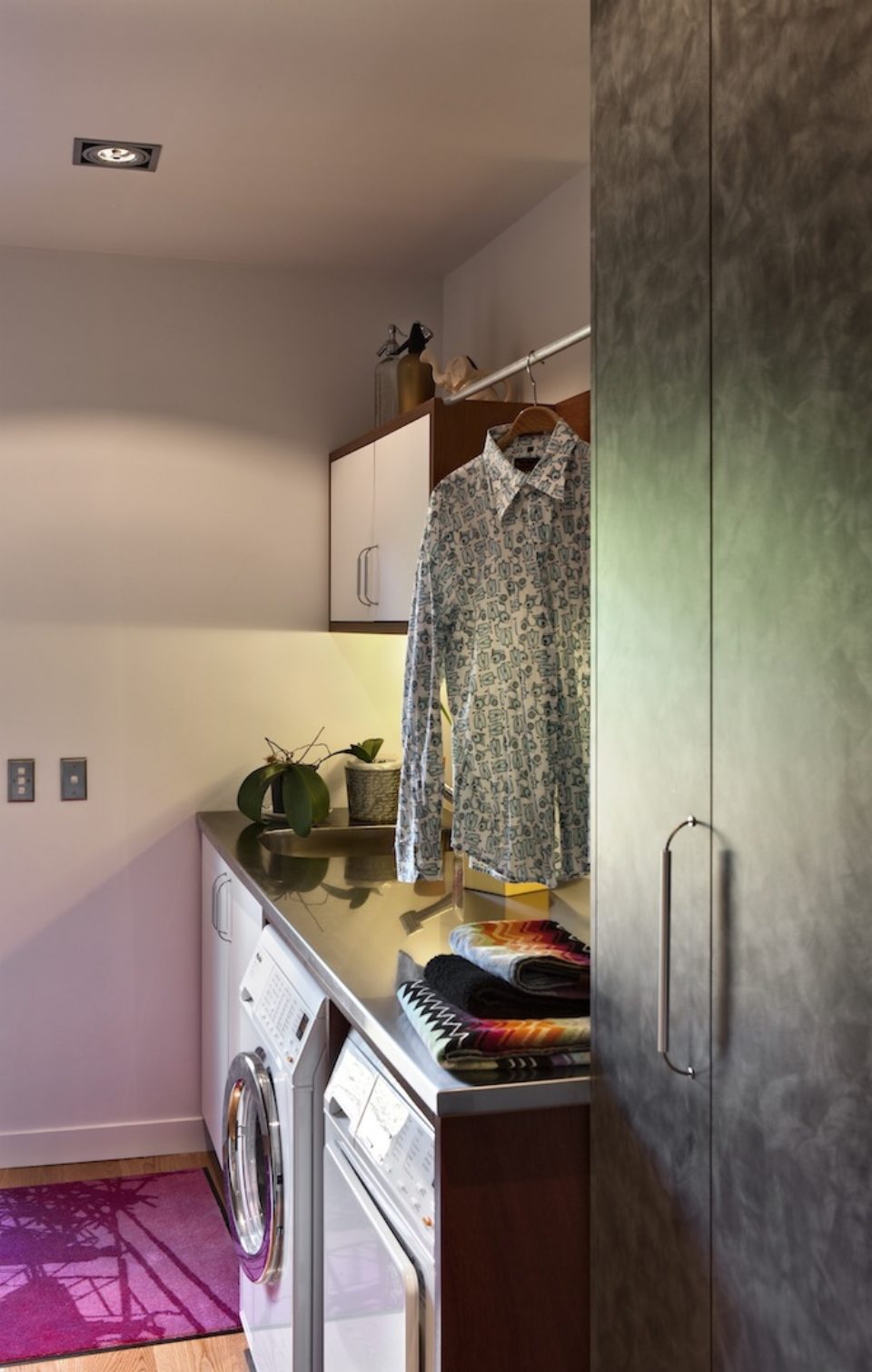 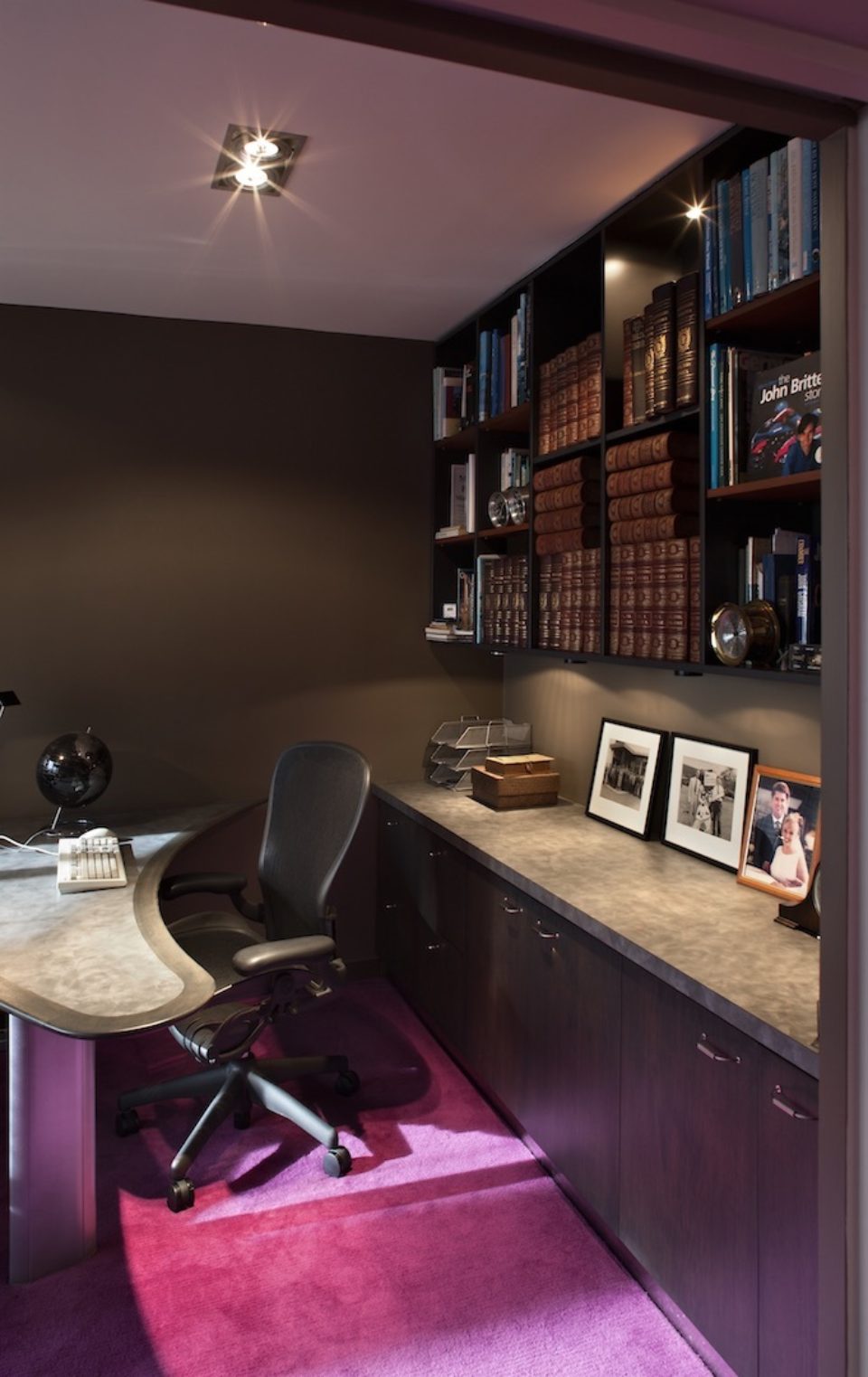 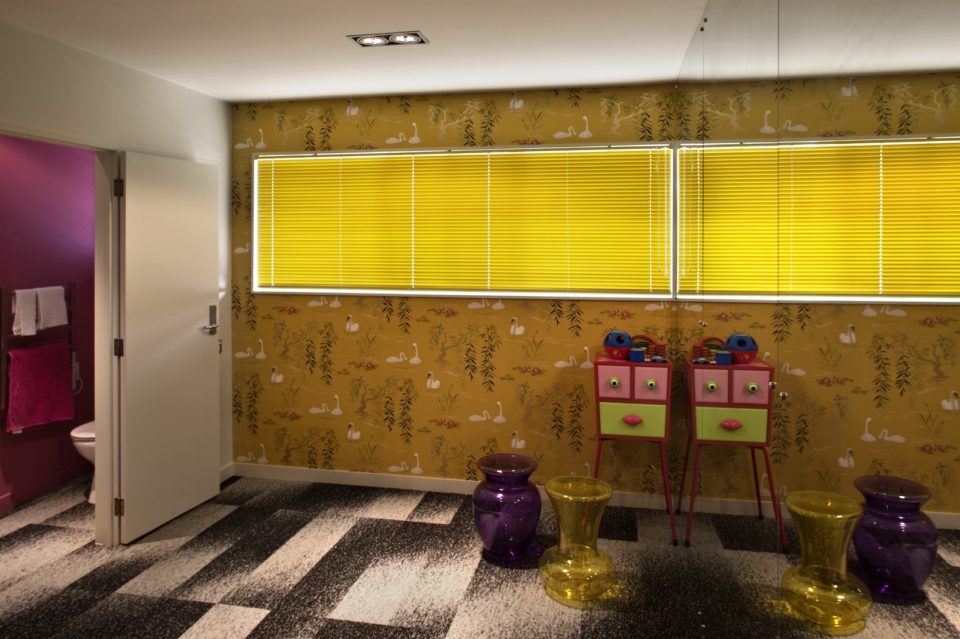 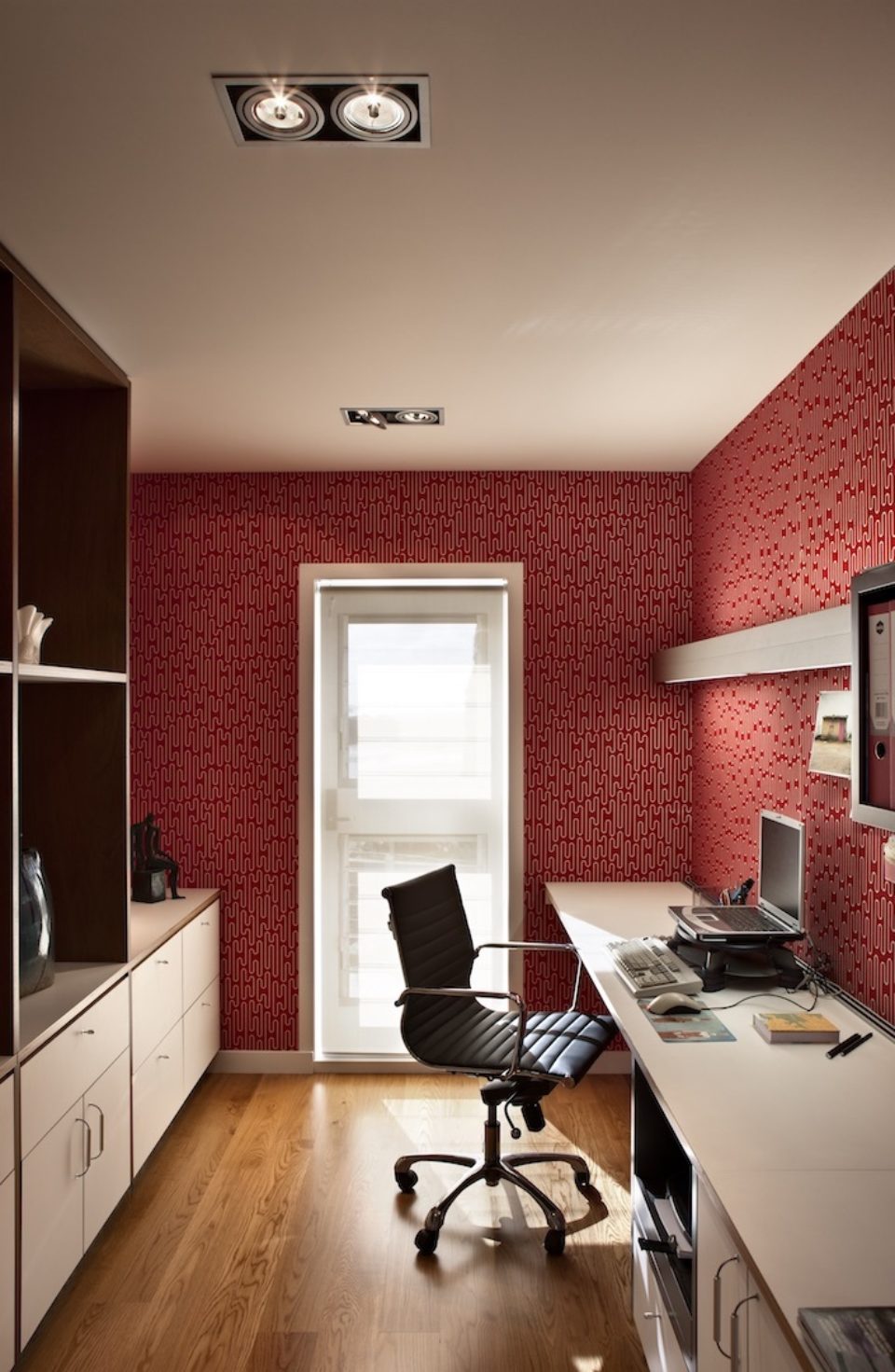 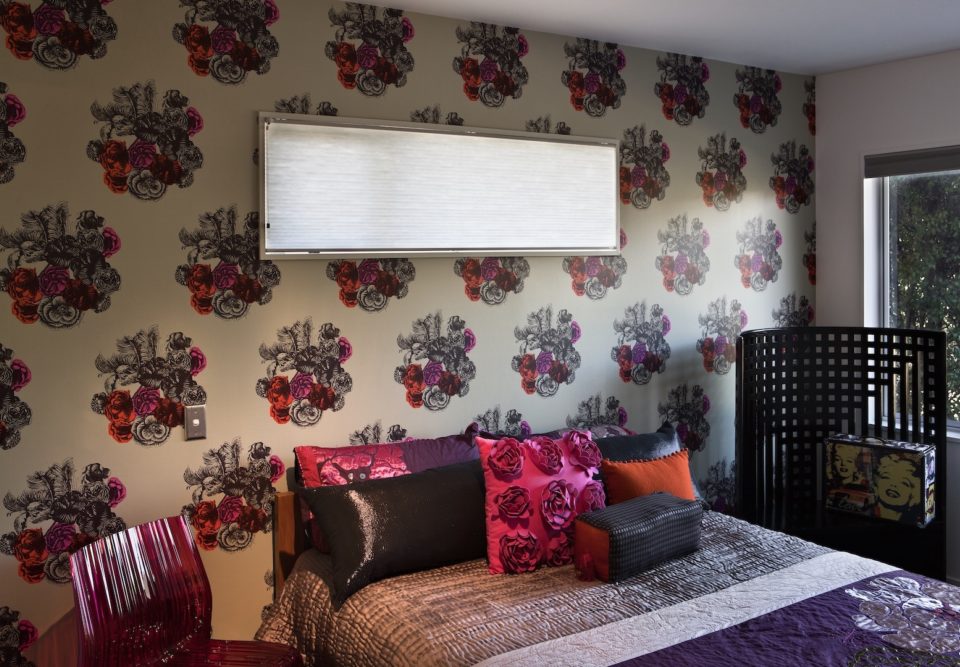 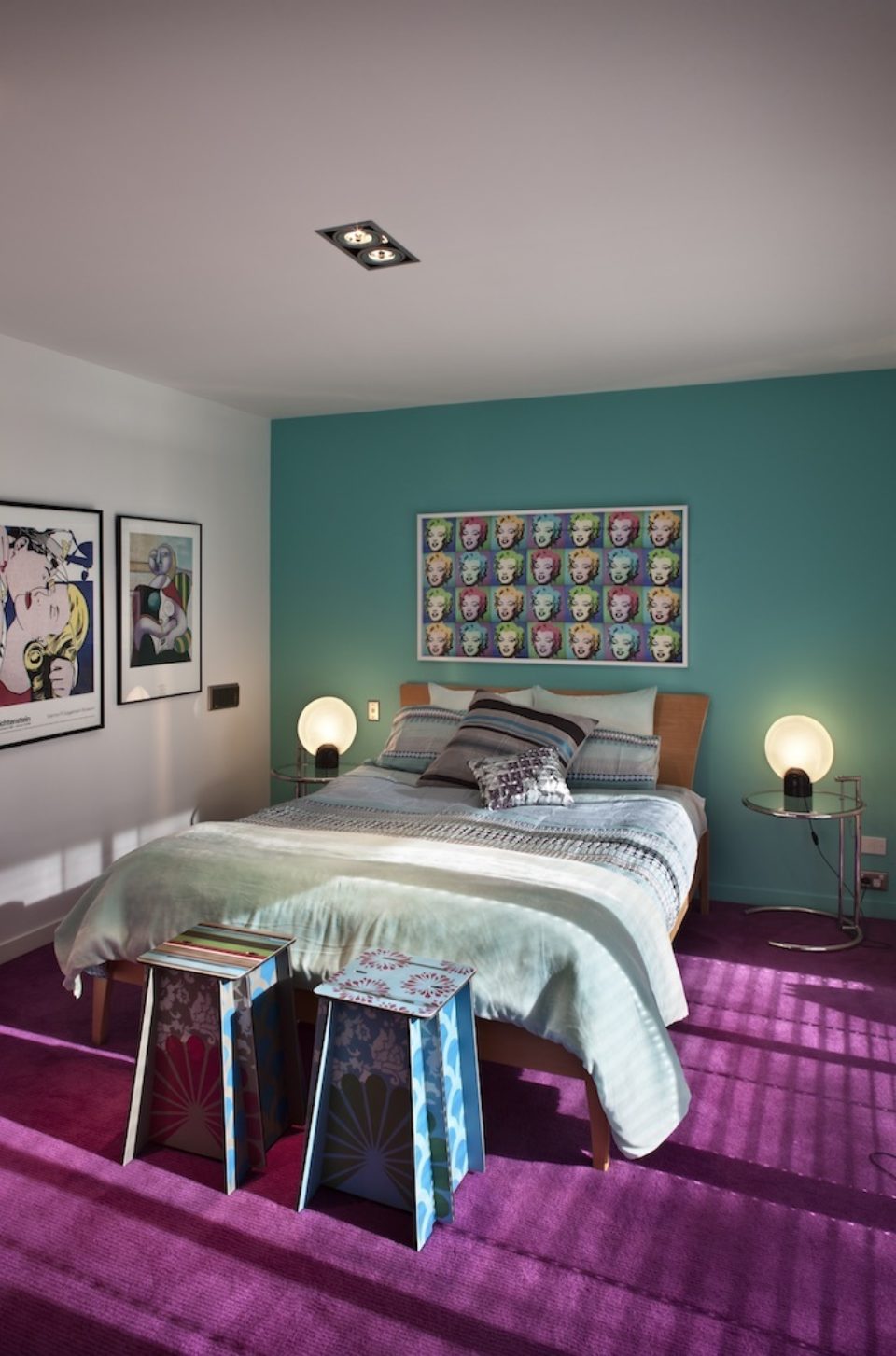 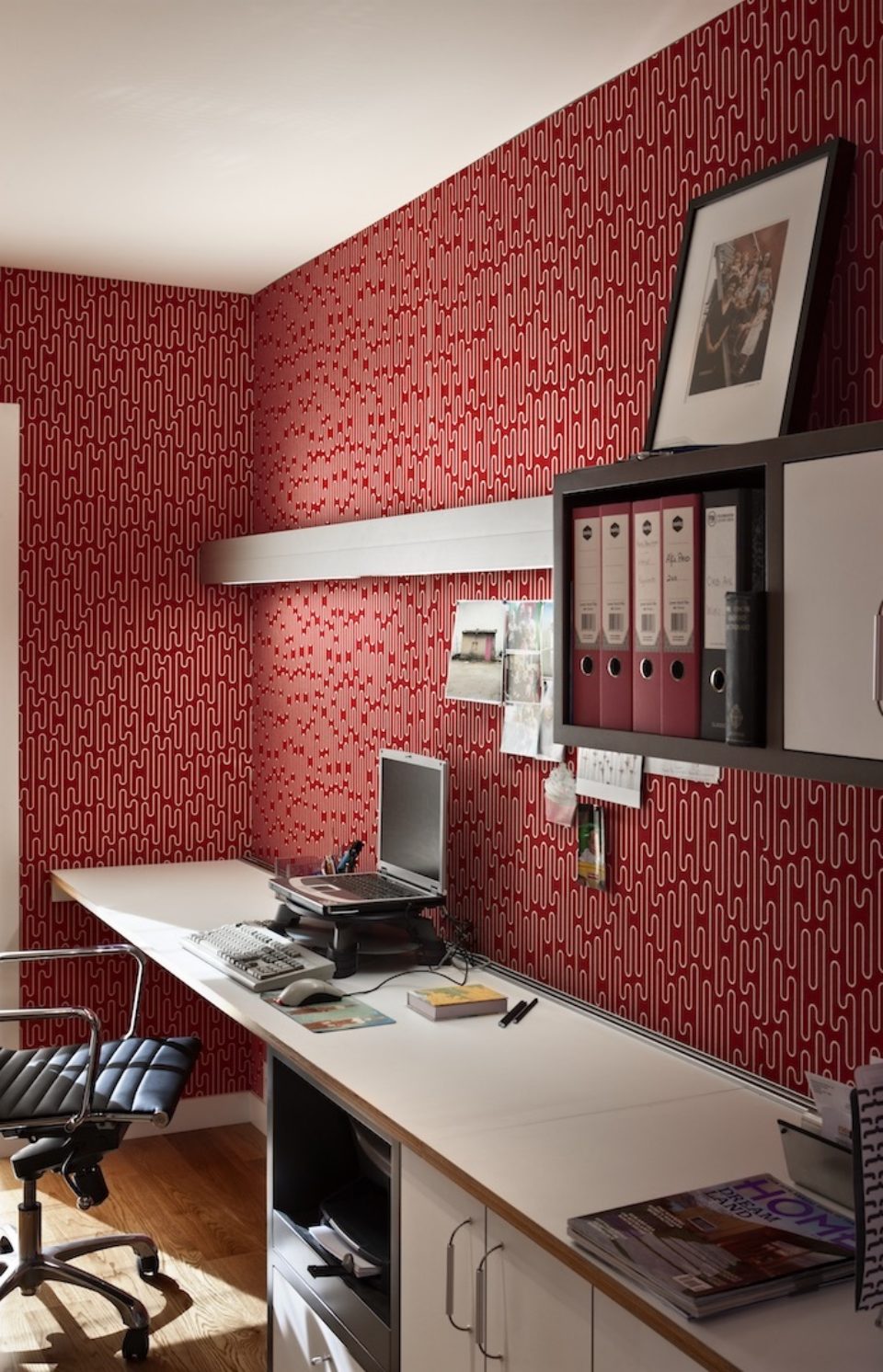 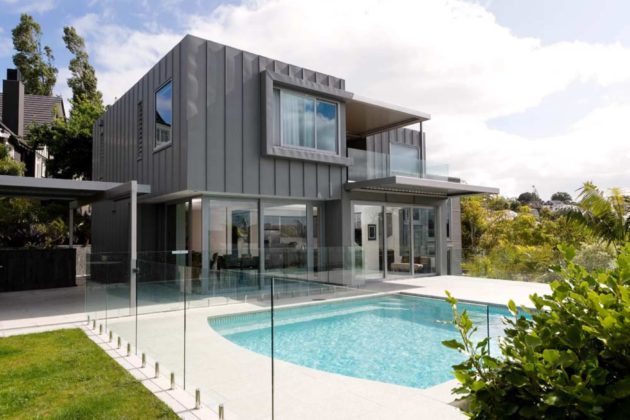 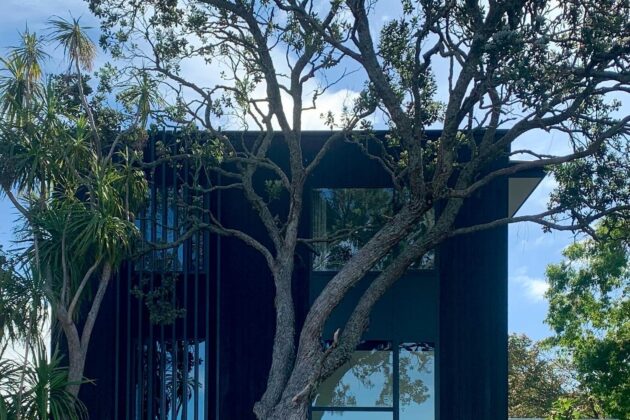